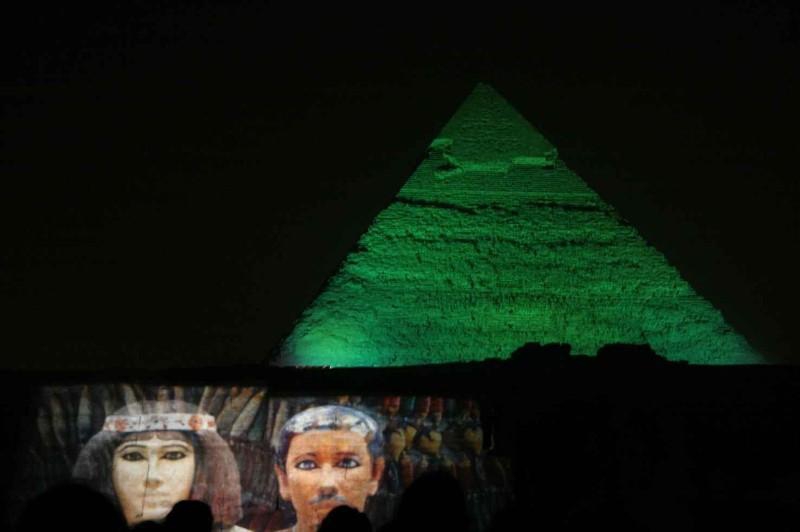 Want a truly unforgettable evening of entertainment in Cairo? Then don't miss the world-famous Pyramids Sound and Light Show in Giza! You'll hear the story of Egypt as seen through the eyes of the Sphinx over the ages, and see the breathtaking site of the floodlit pyramids lit up under the stars.

The Sound and Light Show at the Great Pyramids takes place on the Giza plateau, around 30 minutes from Cairo. The one-hour show begins with the illumination of the Sphinx, who narrates the history of the pyramids and their builders.

Using laser beams and light projections on the walls of the Mummification Temple, desert sands, pyramid walls and the Sphinx itself, a condensed story of Egypt unfolds. The accompanying soundtrack complements the surroundings and the voice of the Sphinx is suitably dramatic and mysterious!

After the show your driver/guide will meet you at the gates of the complex to escort you back to your hotel. With your own private transportation on this tour, you will travel directly between your hotel and the Sound and Light Show without stopping to collect other passengers.

• Lasers and light projections light up the Sphinx, the pyramids and the desert sands

• Unforgettable sight of the pyramids floodlit at night

• Entertaining Egyptian history told from the viewpoint of the Sphinx

• Private air-conditioned transportation to and from The hotel

o Hotel pickup and drop off

• Food and drinks, unless specified

All of our providers offer 24/7 support

Create & Share your own Guide to Cairo with friends and family!

Add your recommended places to visit by browsing the website and pressing the icon.

We Are Part of the My Guide Network!